Since then a flow of new energy has come to the domain with the return of the Kleinknecht kids, Jules and Fanny, both returning home after a series of international winemaker stages. 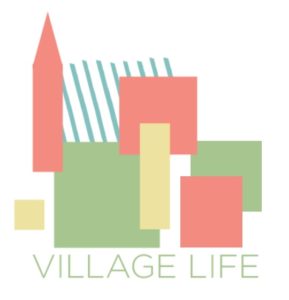 Here we go, back to downtown Mittelbergheim and knocking on another door. It’s really more of an uptown place, with four roads crossing high up at the village centre. It is the definition of a wine village, with 20 winemaking families in a population of 650. Nine of these domaines are working their vineyards using organic methods, and the first to adopt this approach was André Kleinknecht back in 1998.

In our profile on Lucas Rieffel, we enthuse and rave about the progressive energy in winemaking that flows from Mittelbergheim. We have loosely termed the group of artisans involved the Mittelbergheim School; a collective of winemakers and associated artists with lots of cross influences, who are producing wines with a level of intimate and progressive newness about them. This will be an on-going topic as we continue to write up more producer profiles from the Mittelbergheim and its surrounding villages.

And the name Mittelbergheim? Meaning Middle Bergheim, with the village sitting midway on a straight line between Scharrabergheim 35 km to the north, and Bergheim to the south. Mittelbergheim was the wagon-staging stopover between the Bergheim’s and the story goes like this; 35km is the distance an ox-drawn wagon could go on a good day. We will stop right there before we get going on our stork stories. 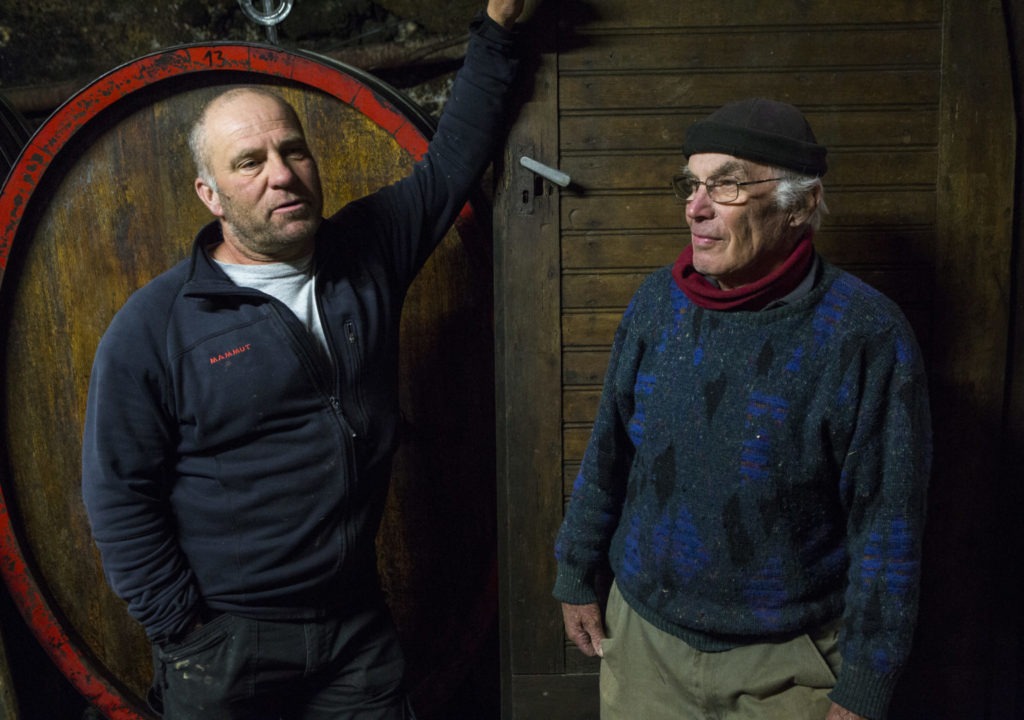 André works a range of Grand Cru’s and lieux-dits (place name) vineyards, that run from North to South on the foothills that skirt the west of the village. As mentioned above, the domain went organic in 1998, then biodynamic in 2012 and was then fully Demeter certified in 2014. André cites Jean-Pierre Frick as a big influence, and he had a lot of contact with Jean-Pierre throughout the conversion of the domaine to biodynamic farming and the move towards increasingly considered wine making. Patrick Meyer is also another strong influence from nearby Nothalten. A link to our short interview with Patrick is (here). In case you haven’t worked it out – this is a domaine targeting a natural wine approach! Using indigenous yeasts, zero or a parsimonious use of sulfites in the range of cuveés, with no or light filtering as required. André also works across his range of wines towards as dry a finish as possible.

When we visited last season, Andrés father joined us in the cellar and at the tasting table. It was interesting how the discussion centered on going back to traditional ways but also taking advantage of more patient and controlled wine making techniques.  A Back to the Future type of approach, which can be taken as one of the frames of the current natural wine movement.

The Art of the Label 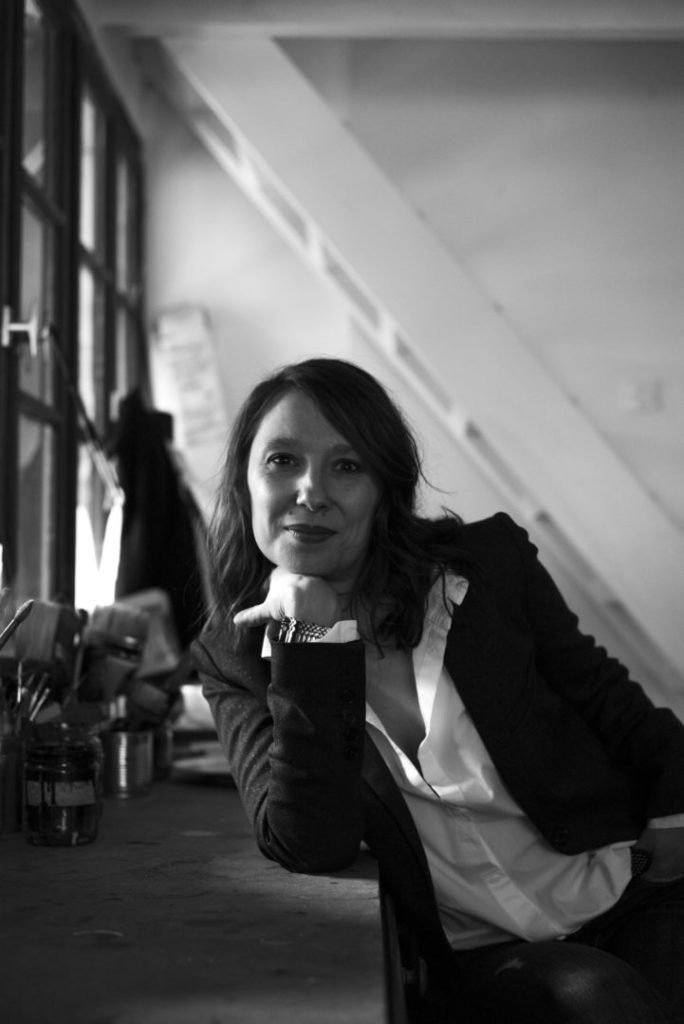 There is a lot of artistic input into wine labels in Alsace, and particularly in Mittelbergheim. Veronique Archambault has her atelier at the top of the village and she has collaborated with André on a new series of labels. This interaction between local artists and the artisan winemakers provides a sort of localised fusion, which captures the energy of a place. Veronique works with Indian Ink and the labels bring a fabulous balance of nuance and force, that fits well with how these wines are produced. Force of nature, nuance in the vineyards and nuance in the cellar. Then there is force and nuance around all aspects of appearance, marketing, export and getting these wines into wine shops and restaurants all around the planet.

The Vineyards and the Wines

The numerous parcelles of the Kleinknecht domaine extend to just over 9 hectares. Annual production is around 30,000 bottles, of which 40% goes to export, principally to Japan and Denmark but also to Canada, Germany and Switzerland.

The winemaking vision is to produce the absolute best grapes possible from meticulous attention to detail in the vineyard. This has extended to introducing horse work on the Zotzenberg Grand Cru and the Rebbuhl lieu-dit. From the resulting top quality fruit, total care and attention goes into the winemaking. This is a case study of a highly focused artisanal approach. This is fine tuning everything that goes on. This is the art of winemaking.

And this being a family business, the art of commercializing and marketing is run by Isabelle Kleinknecht. Isabelle did a side entrance during our last visit, with a short  and energetic cameo appearance in the tasting room. 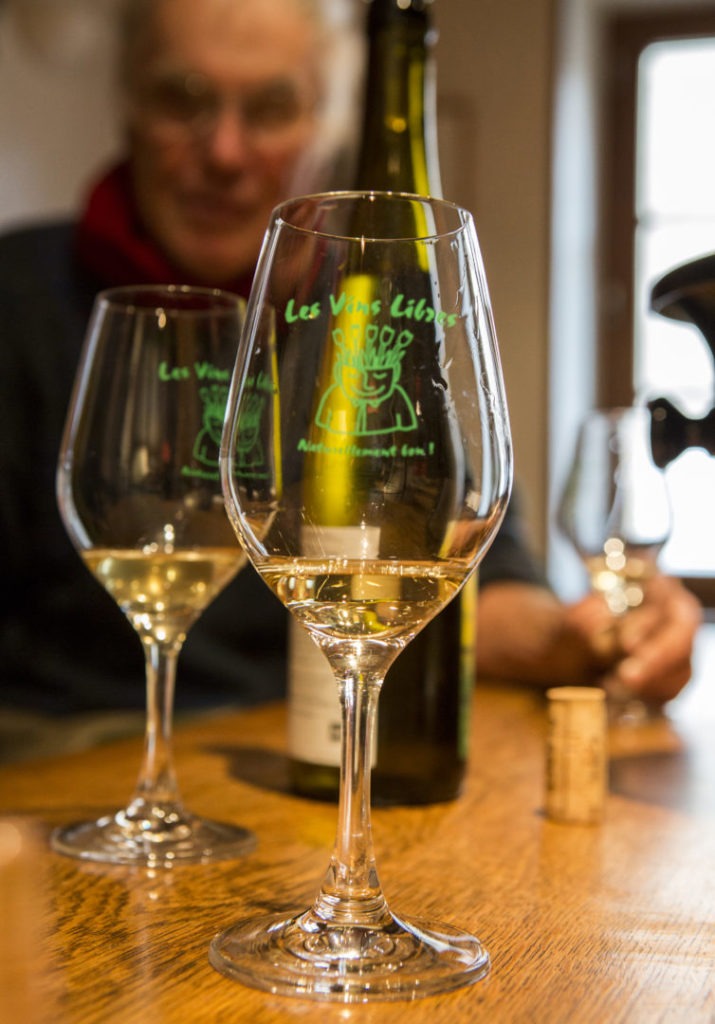 The Kirchberg de Barr Grand Cru, which lies to the north of Mittelbergheim and extends to 40.6 hectares. This is a south and southeast-facing block that contains numerous individual lieu-dit vineyards that were bundled into the Grand Cru when it was designated in 1983. The steep slopes run from 215 to 330 meters and the soil type is marl-limestone with a good scattering of small limestone rocks in the topsoil. The top of the vineyard is bordered by forest. André produces Pinot Noir, Riesling and Gewurztraminer from the Kirchberg de Barr.

The Pinot Noir was planted in 2008 as a 30 ares parcelle bang in the middle of the Grand Cru. This faces directly south on a steep sloping section. Because of its situation and exposure, it is usually one of the first parcelles that are harvested. André described this as “une jolie parcelle, bien protégé” (a well protected, nice plot). And there are high expectations of Pinot Noir in Alsace and you can check out a background piece here. We tasted the Pinot Noir “K” 2015 on two separate occasions. This wine was produced from a small yield of 15 hectolitres per hectare, went through two weeks of maceration on whole bunches and was raised in mature oak barrels for 18 months. This is ready to drink now, with a slight red fruit reduction on the nose and delicate tannins and round griotte cherries on the palate.  A delicious drinkable wine, with a fine balanced structure, that nicely holds together the ripe fruit.

Starting with the 2017 vintage, André is planning to bottle all his Pinot Noir in magnums. 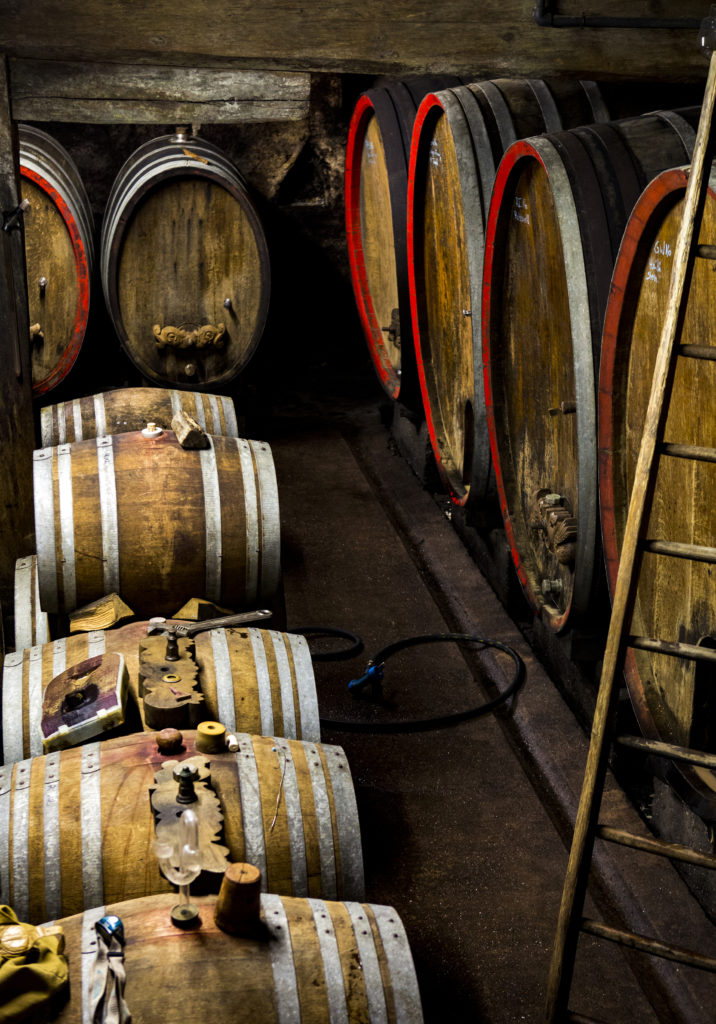 All the white wines from the Grand Cru’s go through 18 months to two years of élevage on the lees in traditional large foudres. This method develops good levels of complexity, structure and depth in the resulting wines.

We tasted the Riesling Kirchberg de Barr 2013, which was super clear, with tart agrumes on the nose and balanced green apple, acidity on the palate. The 2014 was less pronounced in acidity with rounder, more orange peel agrumes on the palate. Interesting wines, that are drinking well today, but should develop for at least another five to ten years.

The Zotzenberg Grand Cru hugs the west of the village. The 36.4 hectares of marl-limestone are more east than south facing. The slope is undulating and runs from 215 to 320 meters. Designated in 1992, the Zotzenberg is the only Grand Cru where Sylvaner can be named as a variety. The marl content tends to produce big wines that can have a certain roundness to them.

André produces Pinot Gris and Sylvaner on the Zotzenberg. We tasted the 2015 Sylvaner from a large foudre. It was slightly cloudy in appearance as expected, with ripe white fruits on the nose, round and crunchy on the palate with a dry finish of white pears and quince. On a recent visit in mid March we also tasted the 2012 Zotzenberg Sylvaner. This was clear with green taints, white fruits on the nose, round and full in the mouth with a lovely dry and saline finish that lingered on. Two fabulous wines, from the most serious Sylvaner vineyard in Alsace. 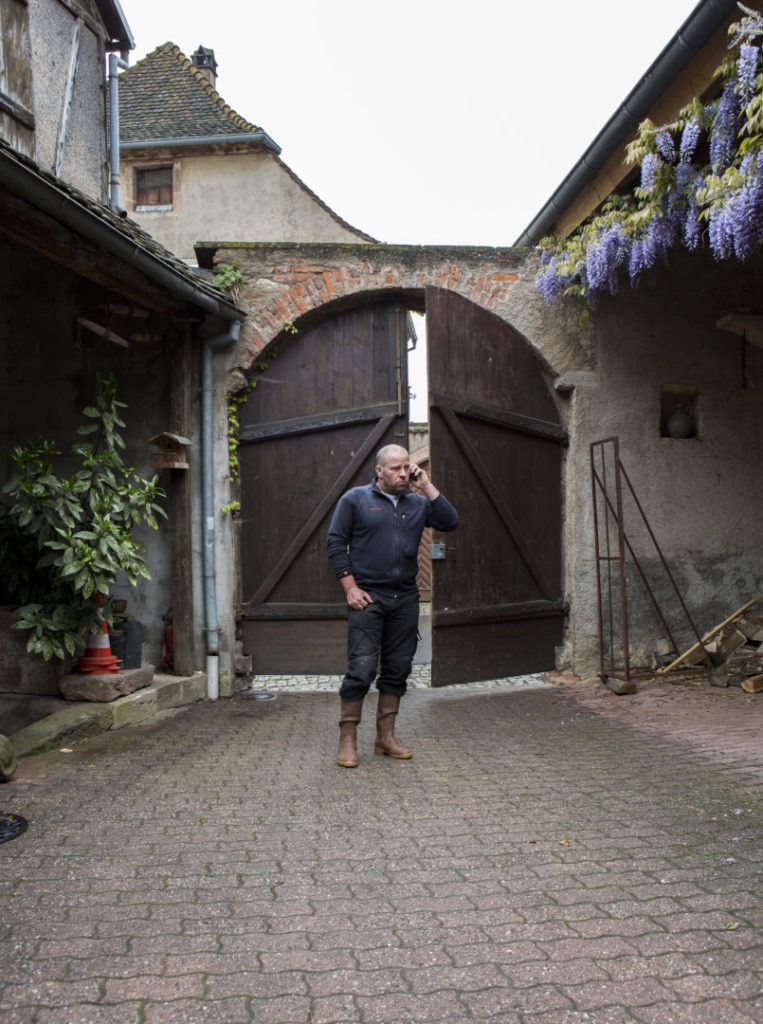 The Rebbuhl lieu-dit is on the granite plateau that sits behind the Kastelberg Grand Cru in Andlau.  André has a good-sized area of 1.4 hectares here. This vineyard is a continued extension from the west of the Gebriet lieu-dit. We have provided some information on the Gebriet in Back in Alsace and the link is here. This is serious Pinot Blanc terroir and André uses his Pinot Blanc and Auxerrois to target high quality cremant production.

We recently tasted the 2014. This was clear with a faint yellow taint, amer on the nose with a serious tight vertical tram on the palate. It finished bone dry, long with great salinity. About half of the vines used for this Riesling were planted in the early 1920’s.

This is the first pass on the profile for André Kleinknecht (and as is the advantage of a blog publication) an update will follow with additional tasting notes from our March visit. 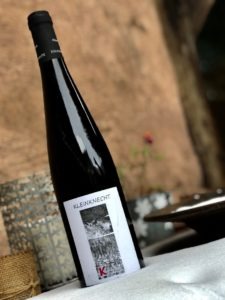 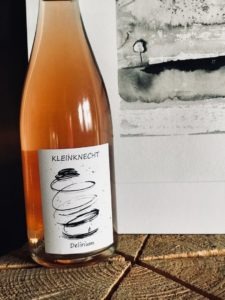 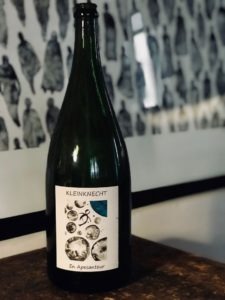