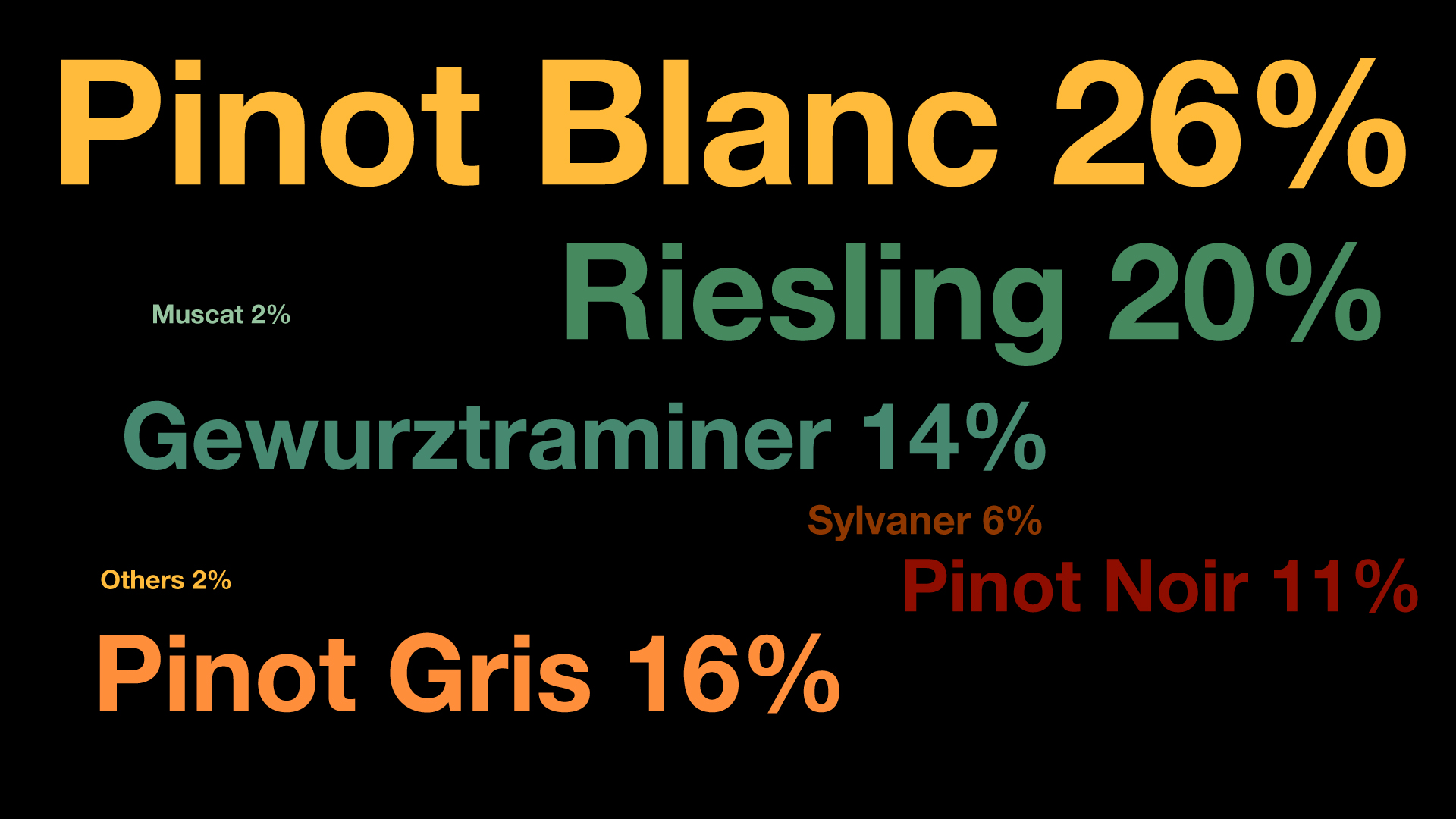 We did provide a comprehensive report on the Alsace wine production numbers for the 2017 harvest year. You can even download a PDF version. We intend to publish a comprehensive report every three or four years, as due to the nature of 15,000+ hectares of vines, there are few major changes that occur year to year. The “normal” annual variations are largely to do with the weather conditions, and these can be covered in a couple of paragraphs of text.

As mentioned in the 2017 report, that year took a hit in total yield due to a couple of days of extreme frost in April. Gewurztraminer was particularly impacted in certain sectors. There was a large rebound in 2018, 23% up in yield from 2017. For the following 2019 harvest, total vineyard yield was back down to 1,028,705 Hectolitres. That’s equivalent of around 140+ million, 750 cl bottles. This could be considered as a “standard” year in Alsace, for total wine produced from 15,623 hectares of planted vines.

A few notes from winemaker visits on that 2018 bumper crop. We only managed a day of picking at Jean-Marc Dreyer’s in Rosheim. This was right at the end of the harvest, but we had passed by a couple of weeks earlier when Jean-Marc was juggling with every foudre, barrel, crusher, bin and trailer he had, to manage the glut of fruit coming in every day. On a visit to Jean-Pierre Frick’s in March 2019, he explained it was the first time ever that he felt totally taken up by a harvest, that the harvest was in control of him and he just had to go with it. He said something along the lines “that nature truly ran the show”. Another take on 2018 came from Lucas Rieffel at a visit this July (2020) in Mittelbergheim. Lucas explained that there is a tendency to manage to lower yields for quality, but twice in three harvests, bumper crops came in due to ideal weather conditions. He said that winemakers were getting used to this and working out how best to manage it. Lucas said this was not a bad thing.

We will finish up with a comment on Pinot Noir production in Alsace. It is regularly reported that the planted area is going up, and so it has, from 198 hectares to 1,737 hectares in 50 years.

That comes in at 11% of the wine region’s vineyards. One of the drivers for this, is the dossier for Pinot Noir to be recognized as a Grand Cru variety. A dossier which is slowly making its way through the layers of French wine bureaucracy. But only 10% of the Pinot Noir production goes to red wine, the rest is destined for Alsace’s ever growing cremant output, the main driver for Pinot Noir vineyards.

Compiled by the Back In Alsace Project

A report based on the data released in April 2018  by the CIVA (Conseil Interprofessional Vins d’Alsace).

The most recent set of annual statistics on Alsace wine production is from 2017. The numbers are compiled by the Conseil Interprofessionel des Vins d’Alsace (the CIVA) and are used by various official bodies for reporting purposes.

We present the big picture overview to encourage an understanding of the fundamentals around grape varieties, volumes and trends. That’s all this is – as the real quality drivers that count, come from the individual producers who put the wine into the bottle.

We are not trying to tell a flowing story and the idea is to jump around the various charts and cherry pick the information of interest.

The key points to be taken from the 2017 vintage. General high quality due to the exceptional harvest conditions, which allowed good acidity balanced with ripeness. The cool nights, misty mornings and sunny afternoons should be the perfect recipe for high quality late harvest wines. The big negative impact on the 2017 vintage were the severe frosts on the 20th and 21st April. The frosts had a significant impact on around 10% of the wine region. Gewurztraminer was particularly hard hit with a 50% reduction in yield from 2016. Sylvaner, Pinot Blanc and Riesling were also impacted and yields were down between 10-25% from the 2016 vintage.

The first chart shows the increase in the Alsace vineyard area between 1969 and 2017. There are 53 appellations in Alsace: AOC Alsace, AOC Crémant Alsace, and 51 named Alsace Grand Crus. In 2017 the surface area was split between them as follows; AOC Alsace 70.4%, AOC Crémant 23.3% and AOC Grand Cru 6.3%. 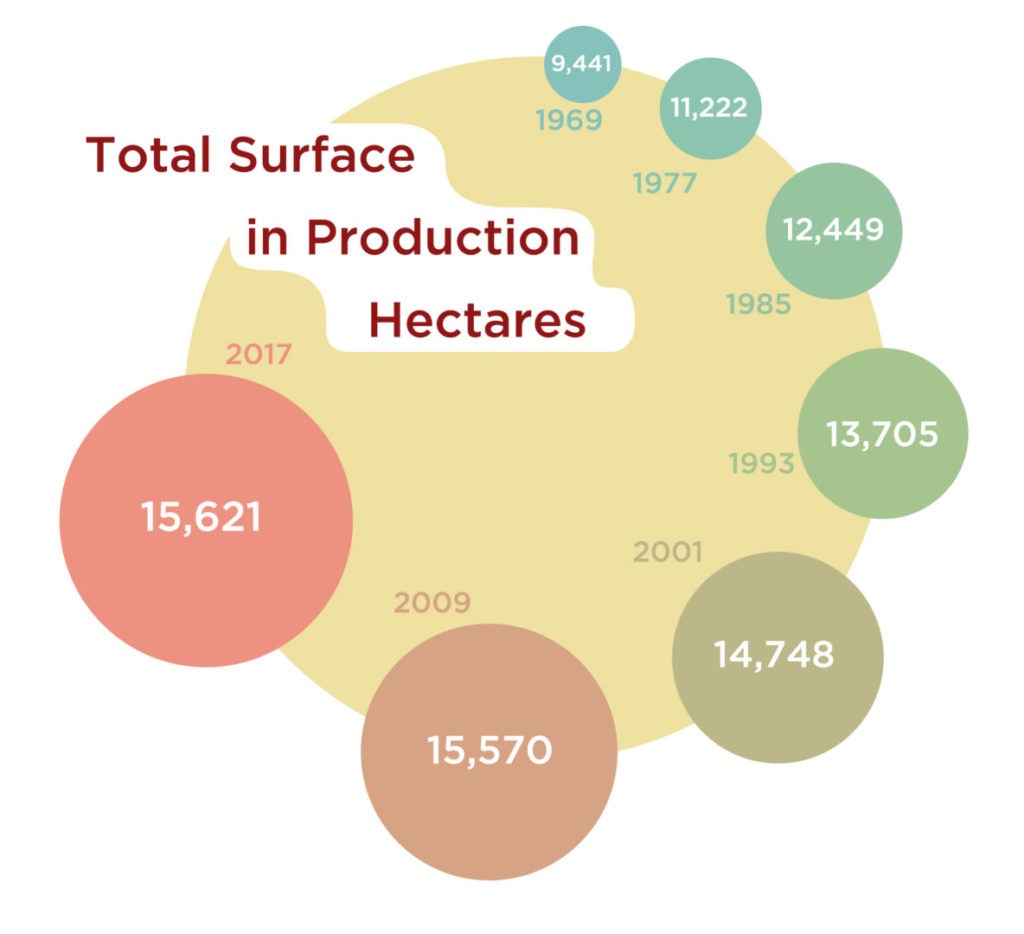 Charts 2 and 3 show the 2017 data for the surface area planted and total yield by each variety. The vast majority of the Alsace wines come with a varietal stamp on the label.

Twelve grape varieties are officially grown in Alsace. The four “noble” Grand Cru varieties: Riesling, Gewurztraminer, Pinot Gris and Muscat (two varieties). Pinot Blanc (including Auxerrois) is the workhorse variety, which is heavily used for cremant production. Pinot Noir, which is the only “red wine” variety in Alsace and also used for rosé cremant production. Sylvaner, which has seen a jump in quality since the area planted, has been significantly reduced. Then the three small footprint varieties: Chasselas, Chardonnay (cremant production) and Klevener de Heiligenstein (Savagnin Rose). 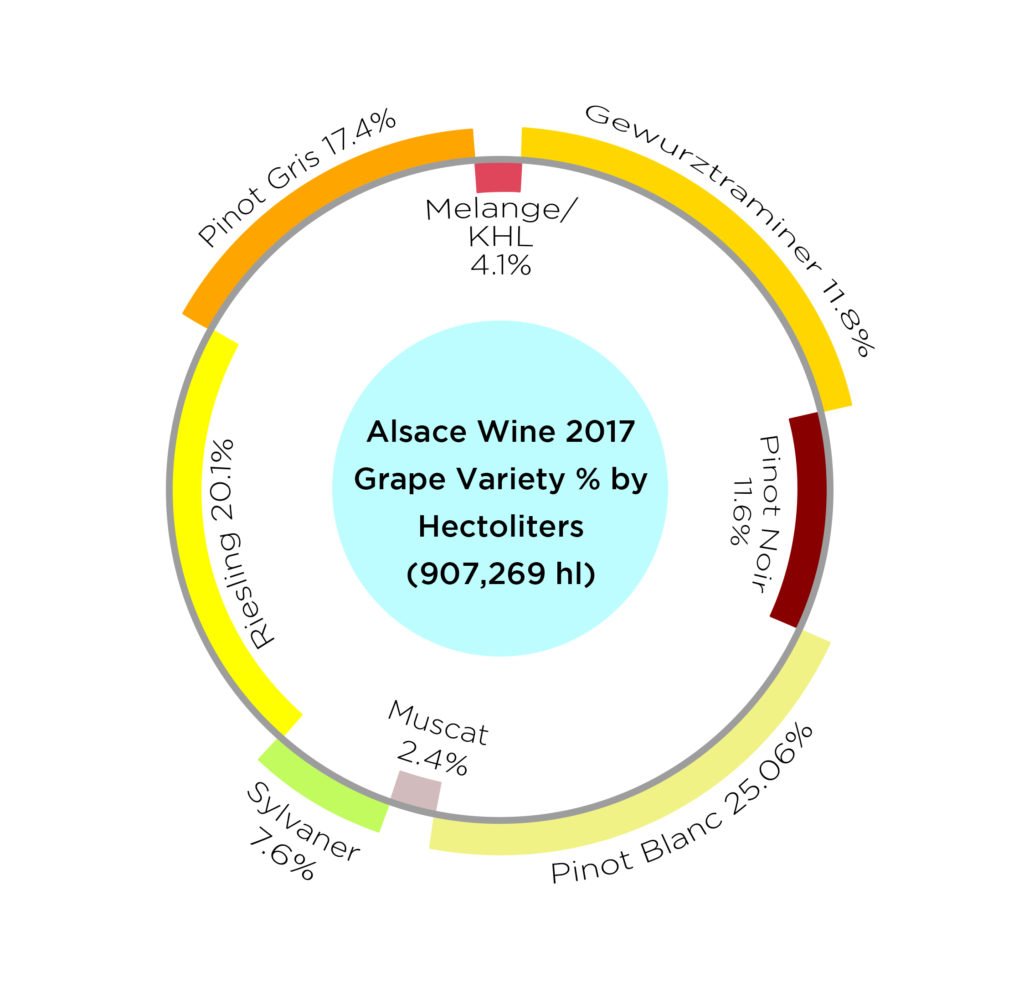 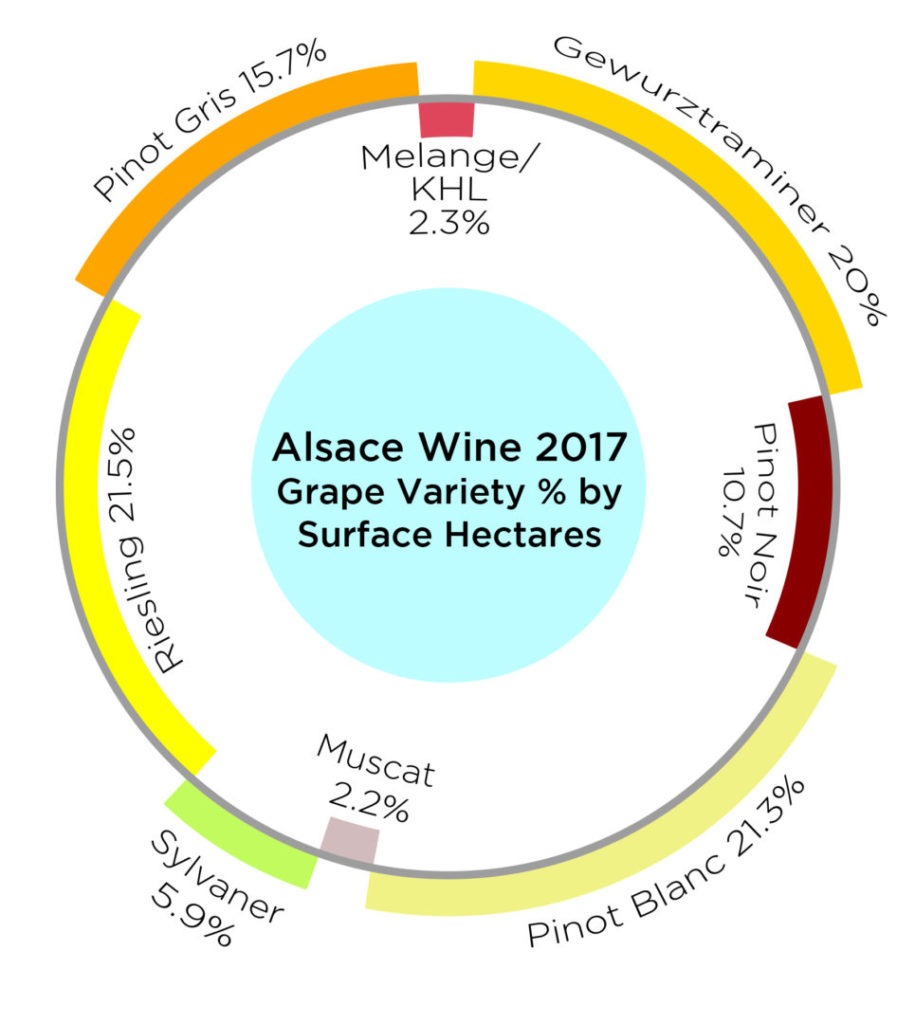 The next chart shows the change in the surface areas planted by variety between 1969 and 2017. With big drops in the Sylvaner and Chasselas areas and big jumps in Pinot Blanc, Riesling, Pinot Gris, Gewurztraminer and Pinot Noir areas. 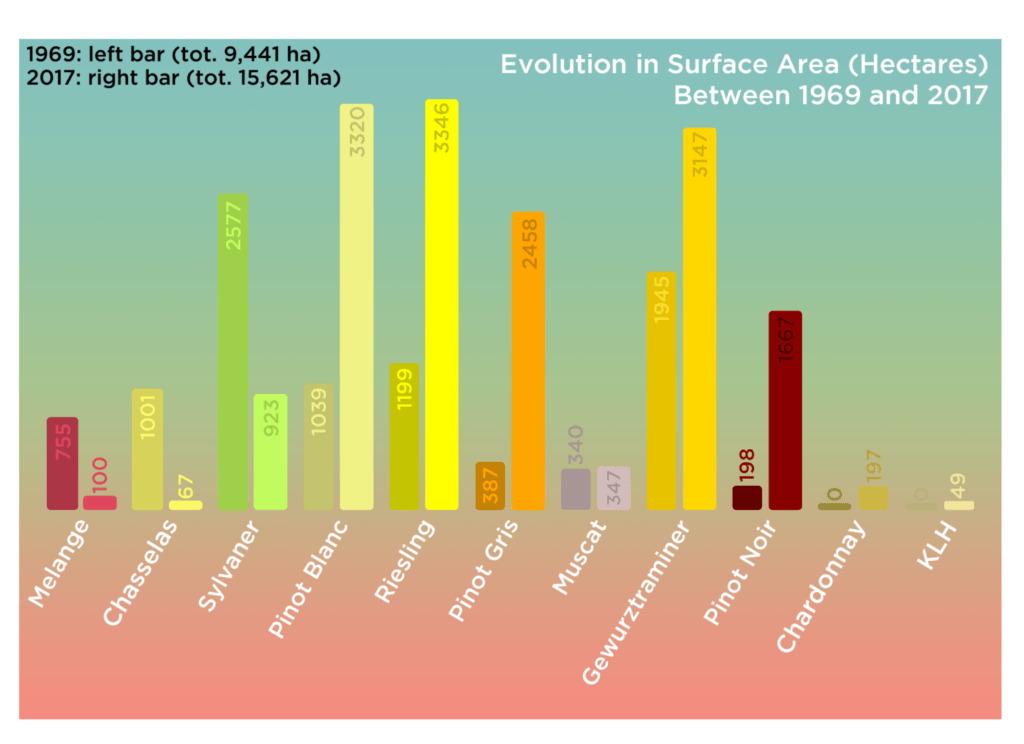 THE TRENDS IN ANNUAL YIELD

Total annual yields in hectolitres are shown in the next chart. Much of the fluctuation is dependent on the annual vintage weather conditions. To note in particular are the three recent low vintages of 2013, 2014 and 2015. These were followed by what was hoped for as a “standard” vintage total in 2016, but there is now another low vintage in 2017. The 2017 vintage is 16% down from 2016 and 13.9% down on the average vintage yields from 2012-2016. 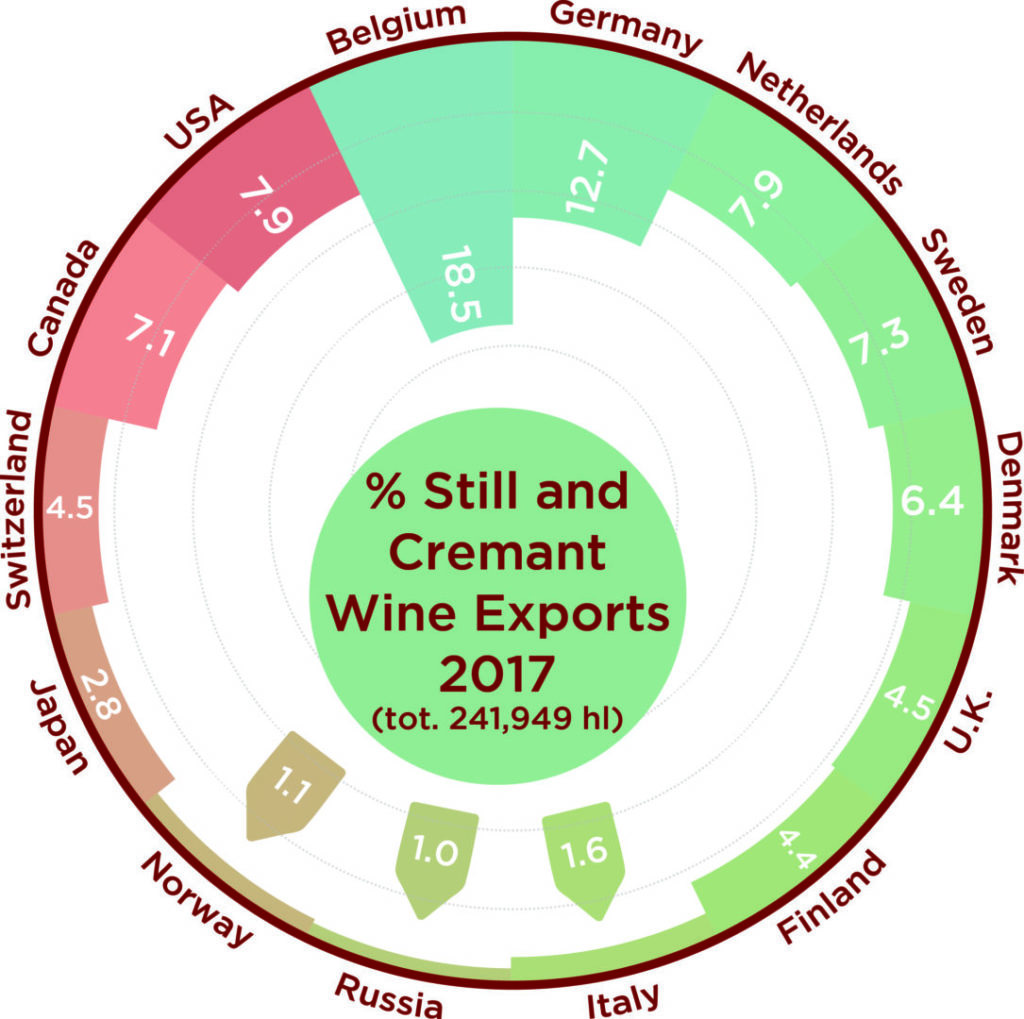 Approximately 25% of Alsace wine production goes to export. The next chart shows how this is split as a percentage by country against total exports. The main importing countries are the Alsace neighbours, plus the Nordic countries (on a per capita basis) where Alsace wine is a fabulous food match. The U.S.A is becoming more important as a better wine appreciation culture develops. Somewhere in the region of 30 million bottles are exported each year.

Production of Alsace crémant has seen a spectacular development since the early 1980’s. This is driven by a strong demand in France, which accounts for 80% of crémant sales. Of the 20% that goes to export, the U.S. comes in as a strong third behind Belgium and Germany. 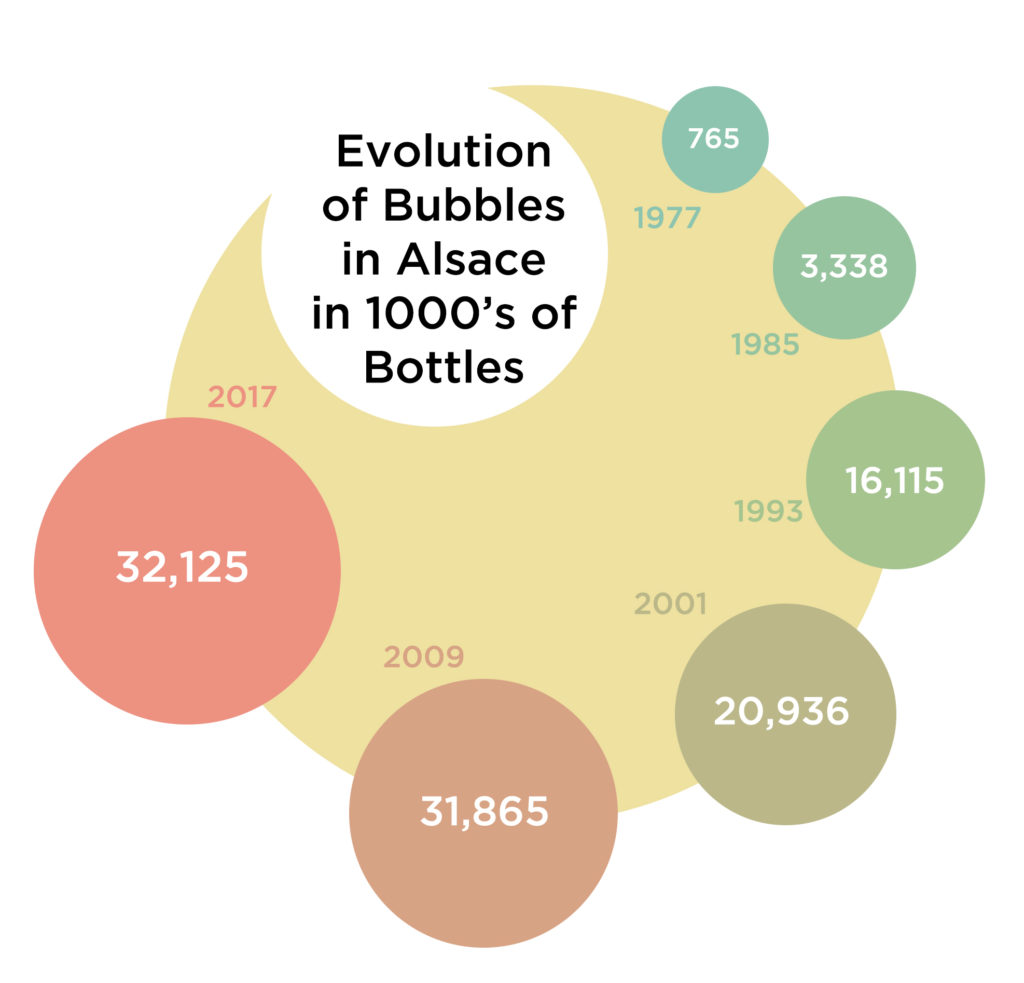 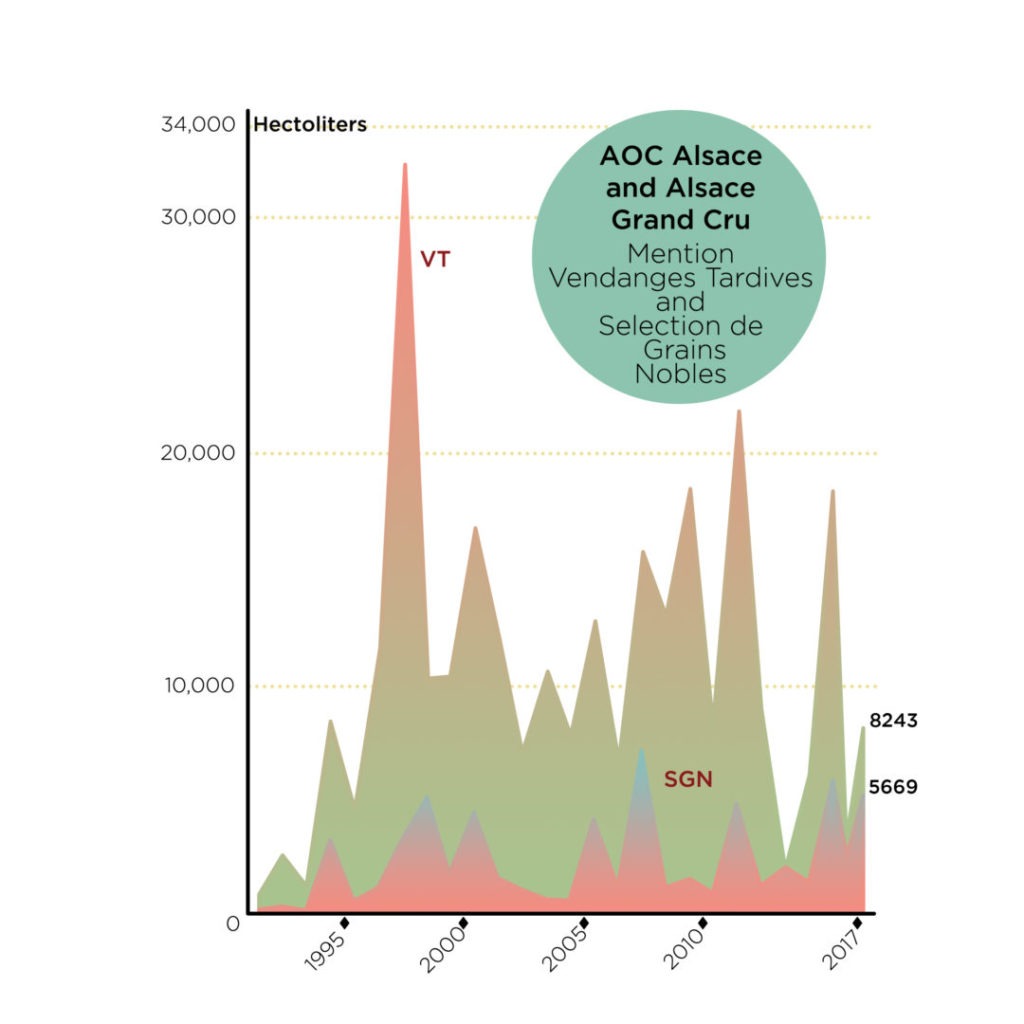 Alsace wine also has two “mentions” which are in the exceptional category. The Alsace sub continental climate has the potential of a long sunny autumn that can allow the development of late harvest, Vendanges Tardives wines. If this comes with misty mornings, then botrytis noble rot can set in and Selection Grains Nobles may be produced. Both these “mentions“ allow a superb concentration in the wines that balances with the varietal characteristics. The production is strictly controlled and wines must go through a tasting panel before being awarded the designations. Minimum levels of residual sugar and alcohol are set and can be adjusted on an annual basis with the intention of tightly controlling quality.  These wines, especially the SGN wines, can significantly increase in their complexity with long bottle ageing.

Check out the chart and it is obvious that annual vintage conditions play a massive role in the quantity of these wines that are produced. There are bad years, there are good years and there are years for exceptional quality. The good news is that 2017 had almost perfect autumn weather conditions for high quality late harvest wines. In terms of yield, 8,243 Hl of Vendanges Tardives were produced and 5,669 Hl of Selection de Grains Nobles.