1 – The Revue du Vin de France published a special report with a cover page on ” Alsace, the wine region the most Biodynamic in Europe.” In addition the  editorial takes the lead with ” The Hour of Biodynamics.” The main fourteen page article includes a map and listing of the 52 certified Alsace domaines. There is a detailed explanation on the start of the current wave of biodynamic viticulture going back 50 years. The four pioneer domaines are nicely profiled; Pierre Frick, Josmeyer, Marc Kreydenweiss and Eugène Meyer. The tail-end of the piece produced a bonus of two pages on the Natural Wine scene in Alsace. The article was a breath of fresh air from La Revue, which has an overwhelming tendency to dwell on the quality classics of the French wine region.

But it was an expected disappointment when a bunch of barbed criticism was aimed at the Natural Wine community. Expected, as these winemakers have established a successful reputation and that always brings some flak when the status quo takes a tremor.  In this case the status quo seems to be The Revue authors.  The core group of 20+ Natural Wine producers are putting Alsace out there in the key cities where there is a big appreciation for Natural Wine. You find the wines of Frick, Meyer, Schueller, Binner, Bannwarth, Kumpf et Meyer, Dreyer, Lindenlaub, Rietsch, Kleinknecht, Riss, Beck-Hartweg, Geschickt, Brand, Ginglinger, Les Vins Pirouettes and Jerome Francois (humble apologies for those not mentioned),  popping up in the coolest of wine bars, wine shops and restaurants from Tokyo to New York, from London to Los Angeles and from Copenhagen to Berlin. And of course in Paris. That’s Paris, where all this dangerous new wave and oh so trendy appreciation of a different type of wine got started.

Its a real shame that such a refreshing article descended into some petty bickering on the last two pages. The final word went to Frederic Geschickt, president of Demeter France and a producer of Natural Wines in Ammerschwihr. He diplomatically didn’t see any big issues between the biodynamic and the natural wine camps and could see these groups getting closer. In fact these “camps” are massively overlapping in our humble opinion. Storm in a tea cup, storm in a wine glass, sour grapes stirred up for a bit of controversy.

2 – Cuveé is a new quarterly wine magazine/review and the 4th edition is totally dedicated to Alsace. The series is the work of Stephanie Koehler and you can order a copy at cuvee-magazine.com. We have yet to lay our hands on a copy, but they are in the post, despatched to Back In Alsace HQ.

And they arrived. Great to see 120 pages of an English language publication dedicated to independent Alsace producers. Lots of in-depth stories and insights into the region. There are some meaningful discussions on the approach in the vineyards and in the cellar, again with an emphasis on organic work and patience and minimal intervention during winemaking. Antoine Kreydenweiss and Florian Beck-Hartweg provide some key opinions on careful and relevant wine making, defending what is traditional in Alsace compared to what should be tagged conventional.

Marc Tempé dishes out a strong dose of the independent approach and there is the most fascinating, rambling interview with Jean-Michel and Mathieu Deiss.

André Ostertag closes out the book with a final upbeat paragraph on the handing over of family domaines to the next generation. In his case, as Arthur Ostertag starts to take a hold of the reins from André.

Stephanie has done a great job in diving into many of the debates and challenges going on in the region. The information and opinions from the winemakers are quite pointed and address the fine matters. If you know the region well, you can read quite a bit between the lines.

The focus is very much on the smaller independent domains which produce high quality artisan wines. The book steers away from the big operators who dominate chunks of the market. These groups are not doing much around defining the new Alsace and are certainly not addressing what the new generation of wine drinkers are after.

Some of the Jean-Michel Deiss quotes are so on target “The modern consumers in our focal area are people who demand transparence. They want to know where a product comes from, how its made. And they want to know something even more important that no one else ever mentions: they want to know that what they buy is good for them.”

We are on the same page at Back In Alsace.

If you are interested in Alsace – the book is a pretty good time check on the current tendencies to stay relevant in Alsace. Producers need to get to organic or biodynamic vineyard management. Thats base camp. And they need to get more transparent around what they are doing in the cellar. That shift to a general transparency comes through in almost every winemaker profile in the book.

3 – Last but not least on the publication front. Our absolute favourite French wine revue, Le Rouge et Le Blanc, ran a cover picture and major article on Les Vins Pirouettes. This initiative driven by Christian Binner, Vanessa Letort, Pierre Sanchez and Xavier Couturier, works across a dozen Alsace domains producing a range of Natural Wine cuveés. This adventure, now into its third year, is commercializing around 60,000 bottles a year. An Alsace start-up, rocking and rolling and making a difference. Some information is covered in our STORIES section on the 2017 RAW Wine Fairs report here

4 – Finally a BIG NEW EVENT happened – Salon Brutes, a spanking new Natural Wine fair, staged an inaugural edition in November. This was housed in Mulhouse, Alsace. You can check out a short summary report, plus a bunch of cool photos from the Brutes Salon and also the Vins Libres Salon here. Edition II is in early planning we are happy to hear. Two Natural Wine Salons in Alsace in 2018 – that’s a strong message and its helping to add to the debate around what should modern Alsace wine be like. 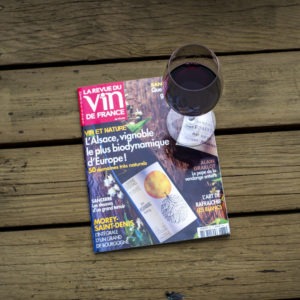